…While I know the standard claim is that Yosemite, Niagara Falls, the upper Yellowstone and the like, afford the greatest natural shows, I am not so sure but the Prairies and Plains, while less stunning at first sight, last longer, fill the esthetic sense fuller, precede all the rest, and make North America’s characteristic landscape.
— Walt Whitman, Specimen Days, 1892

The sprawling horizontal expanse of the Midwestern landscape — diminished only by the restless enormity of the sky above — evokes a sense of wonder in artists and poets alike. An early admirer of the prairie, Walt Whitman equated the tall, sturdy native grasses with American democracy. Variegated and diverse yet unified into a harmonious vista of boundless immensity, the prairie exemplified for Whitman the egalitarian ideals of the country. Today the prairie grasses have been converted into contiguous fields of wheat, corn and soybeans but the land remains tied to a distinctly American mentality and way of life. Identified variously as the breadbasket or heartland, the Midwest has figured since the beginning of the 20th century as the agricultural and industrial center of the United States. As the designation Middle-West suggests, the Midwest also forms the political and cultural middle of the country.

For David Plowden, Whitman’s words, which hang above his desk in his Winnetka, Illinois home, are embodied by Iowa, the place that for him most typifies the values associated with the Midwest (and congruently the United States). Located between the East and West coasts, Iowa could be relegated to the role of a mere byway en route to more exotic locales. The relatively flat to gently rolling topography, at places punctuated by a grove of trees or a stream, is often overlooked for the more dramatic terrain found elsewhere. But the seeming simplicity and uniformity of the land belies a quiet grandeur that embodies an essentially American spirit and experience. How Iowa represents, or rather evokes, this spirit has been a subject of David Plowden’s photography since 1983 when a commission by Smithsonian magazine to photograph corn first introduced the native of the East Coast to Iowa. Since this initial visit, Plowden has returned to Iowa multiple times to document the once commonplace but now rapidly diminishing vistas and iconic structures of rural, small-town America. His black and white photographs should not be understood as mere records of a geographic location but as impressions of a uniquely American place. As the title of his previous publication on Iowa — his 1988 Sense of Place — suggests, the images evoke an experience of Iowa as the epitome of this place.

But what does a sense of place mean? Place, as it has been explained in philosophy or architectural history, does not occur naturally but implies a human presence. Places, even imaginary ones, are locations or things that have been made meaningful by people. But the relationship between people and place is not one-sided. Places can be said to influence us, grounding our sense of identity and experience of our surroundings, as much as we help determine them. Humanized and humanizing, places are inextricably bound to our being and how we engage with the world. Homes in particular embody the relationship that exists between people and the places in which they dwell. As the philosopher Martin Heidegger (1889 – 1976) suggests, the very act of building a home involves a sense of security and comfort — a feeling of being “at home.” This impulse to create a home is primordial — essential to understanding who we are and how we exist in this world. Not just a physical structure made of mortar or wood, the home discloses in subtle ways a person’s (or group’s) sense of identity and his (or their) responses to an environment. Farmsteads, like homes, are residences of someone and not merely residences in and of themselves. Possession of a farm involves not just an external sense of ownership, the financial costs of owning and operating a farm, but also a more internalized relationship with it as a place.

But what and how, one may ask, does all of this relate to Iowa and, in particular, David Plowden’s Iowa? The notion that home is a place integral to a person’s sense of self is not a novel concept. Identifying a geographic region as the Middle-West or the heartland implies that it is a place central to a country’s identity — the very heart of America. In Plowden’s own words, it is not possible to understand America without a visit to the Midwest. In contrast to the woodlands and rocky terrain of Plowden’s native countryside, the Iowan landscape refuses to be contained and diminished.No natural places of refuge like caves or dens can be found in the vast open tracts of land characteristic of Iowa. This sense of unremitting magnitude gives rise to a feeling of vulnerability — an awareness of one’s relative insignificance — as well as the impression of limitless freedom. In this regard, the Iowa landscape gives expression to the democratic ethos Whitman found unique to the United States.

Nowhere is this more apparent than in an image of a farm isolated from its neighbors by intervening miles of corn or soy fields. In rural Iowa the livelihood of a farmer is subject to the vagaries of weather. However stunning and innovative technological advances in farming may be, they cannot offset the damage of a tornado, flood or drought. Plowden’s photograph of a Cedar County farm attests to mankind’s ongoing struggle to create a safe haven from the elements. Moored between the earth and the sky, the farm stands out conspicuously against the immense sky. Providing the only break in the continuous landscape, Plowden’s farm embodies the meaning of home addressed in architectural history and philosophy. 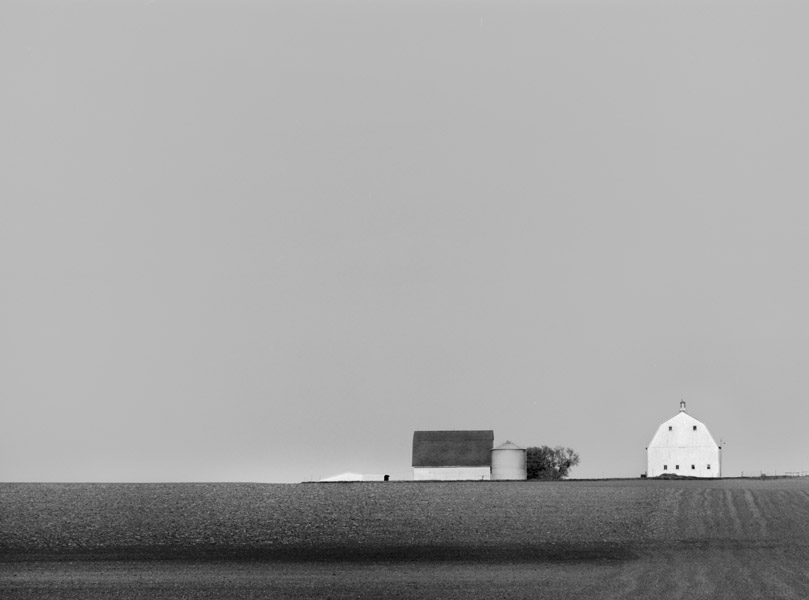 The philosopher Otto Bollnow (1903–1991) argues that a residence was the product of the need to create an active place of resistance. Initially this implied the actions of a single combatant who could not be made to fall. Only subsequently did this lead to the construction of a structure that helped him withstand the advances of his enemies. Such a definition of home finds an unusual but nonetheless apt parallel in the original meaning of the word for the early settlers of the Midwest — the pioneers. In Middle and Old French,pioneer (pionier or peonier respectively) denoted a foot soldier who prepared the way for the army to follow by creating a foothold in his environment. Home should thus not be understood as a given but the product of a man’s need to be at home, to belong and be rooted to a particular site in the world. 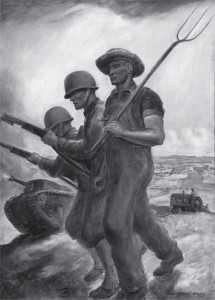 The Farm is a Battleground Too.
John Steuart Curry (ca.1943)

In a prescient echo of Bollnow’s definition of home, John Steuart Curry’s The Farm is a Battleground Too (ca. 1943) reiterates the deep ties an individual may have to his home. A native of the Midwest, Curry’s painting of heroic and stalwart young men heading off to the front appears at first glance to be a patriotic exhortation to support the war effort. An imposing farmer shouldering a pitchfork instead of a rifle marches alongside two infantrymen while in the distance an idyllic agrarian scene of productive farming shifts into a scene of a massive tank rumbling through a wasteland. Eventually reproduced as a propaganda poster, the painting promotes the importance of America’s agriculture in sustaining the efforts of the GIs in Europe and Japan. The ambiguous title of the painting hints however at a more nuanced interpretation. Curry was critical of the war and fearful that it put a strain on farm families by forcing young and able workers to leave the fields for the front. The title thus suggests that the shift in human resources from cultivating land to producing weaponry endangered a way of life and created yet another battlefront worth defending.

Plowden’s account of a conversation with an Iowa farmer echoes the very sentiments expressed by Curry. Upon surveying the land that his family had owned for generations, the farmer remarked, “It is worth defending, isn’t it?” Plowden recalls driving away from the farm and considering the differences in East Coast and Midwestern perceptions of land. In New York City, defending the land typically implies the armed defense of a country or nation. 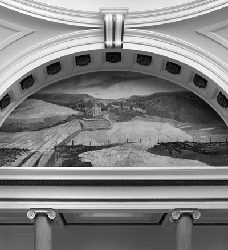 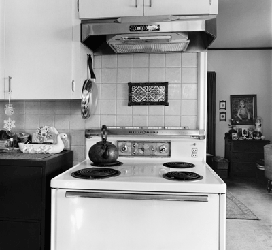 But in rural Iowa, where farmers must contend on a daily basis with its cultivation, land cannot be reduced to such an abstract concept. What protecting the land meant to the farmer was not clear to Plowden; perhaps it meant the danger posed by ruthless advance of modernization on a way of life, or perhaps even foreign invasion.

The farmer’s comment gives credence to the argument that a person’s sense of identity cannot be divorced from the place he/she inhabits. Plowden’s photograph of the mural in the dome rotunda of the Green County Court House in Jefferson underscores the importance of land in Iowa. Decorations of civic buildings typically gravitate towards representations of important historical events or allegorical representations of abstract concepts like Justice and Mercy. The Iowa courthouse, however, offers unexpectedly a more commonplace scene — a view of a rural farm. Nestled in the protective embrace of gently sloping hills, the farm highlights the importance of agriculture to the state’s identity but also gives visual and persuasive form to the argument that dwellings reflect and reinforce man’s need for security. 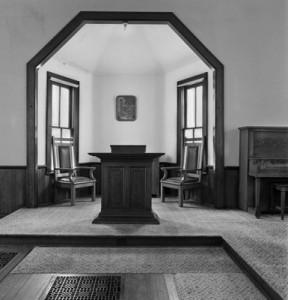 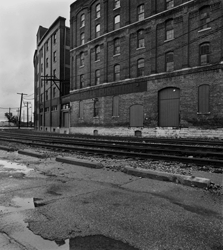 Similarly Plowden’s photographs of interiors reflect this impulse to create places of comfort and security. The iron teakettle that sits on the stove of the pristine kitchen in the Beltz House evokes the seemingly inconsequential rituals that we perform on a daily basis to feel at home. Brewing a cup of tea or coffee on a brisk autumn day, setting out one’s belongings in an impersonal hotel room or decorating our homes with personal mementos are all inherently human acts.
Oddly enough, while Plowden’s photographs give enduring resonance to the human nature of places, most of his compositions are emptied of human presence. As locations that influence and are influenced by the people that inhabit them, places can never truly be empty. The very absence of a person implicates a past or future presence. 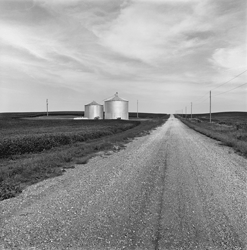 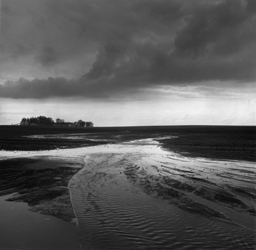 Thus, the vacant chairs, parking lots, gravel roads, and tire tracks bear the imprint of people who once inhabited them and serve as well as invitations to the viewer to experience the places represented in the photographs. But while the empty tracts of land and stretches of cement road dominating the foreground function as thresholds into the photograph, they also set the object of the viewer’s scrutiny — the farms, storefronts and factory buildings — at an elusive distance. For the experience of Iowa perpetuated in Plowden’s photographs is rapidly passing into obscurity. Large department stores have replaced family-run businesses and privately owned farms are few and far in between. Recently Plowden tried to retrace his steps and find the farmer who had once proudly proclaimed that his land was “worth defending.” But when he arrived at the location, the farm was abandoned.

1. John Steuart Curry, The Farm is a Battleground Too

Plowden, David, A Sense of Place. New York/London: W. W. Norton and Company in conjunction with the State Historical Society of Iowa, 1988.